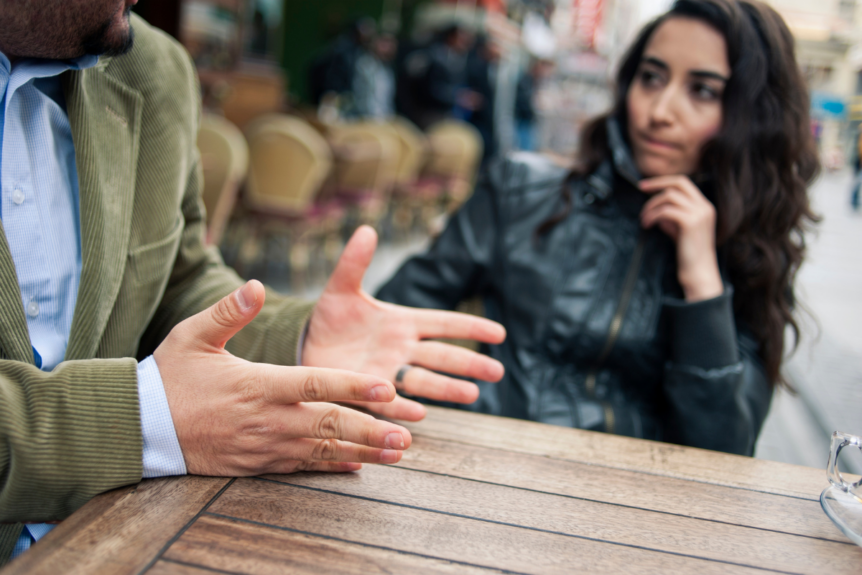 For over-explainers, learning how to stop explaining takes self-awareness, practice, and patience—especially since we are conditioned to answer for our actions.

“Why did you do that?” is a question that becomes ingrained in our psyches.

During one season of my life, I found myself explaining (what felt like) every thought, action and decision.

I did it in text messages, emails, and in-person.

Sometimes — even when no one was asking.

Uncovering the Roots of Explaining

This pattern often starts in childhood, when we must constantly explain ourselves to adults —the people who have power over us…the people we want to please.

For me, having to say, “No” was a major trigger.

I thought I would lose friendships—unless they understood my why.

Because explaining myself was a compulsion rooted in fear, I experienced anxiety anytime I tried to withhold my explanations.

I didn’t know it at the time, but my explanations revealed a lot about my underlying thoughts and beliefs — and I needed to take a deep dive within to understand the why behind them.

Looking back, in each one of those cases, my actions were based on what I felt was happening.

I was guided by what I thought (and feared) people would think.

In reality, those were projections that were coming from within me.

After paying attention to other “explainers”, I developed the ear to be able to hear myself.

I was horrified to realize what I must have sounded like.

The Need to Explain

Eventually, a friend said, “You don’t need to explain yourself to me.” I had never thought of it in that way.

I may not have needed to explain…but I felt compelled. Most of the time, I was on autopilot.

Looking closer (into my motivations) revealed that my compulsion was based in:

I was finally able to see that my needs went far beyond just explaining.

In time, I realized that nobody was providing me with explanations about why :

But still, learning to stop explaining was not an easy habit to break.

Despite recognizing that no one was returning the favor, my anxieties about being misunderstood, criticized, and rejected were powerful motivators.

Coming to a Stop

One of the major keys to ending my self-explaining tour was developing an inner awareness of when I was doing it.

I learned to check in with myself about:

This was a process that happened incrementally, over a couple of years.

But, the insight and wisdom that are gained when we are able to pause…and silently observe ourselves is invaluable and worth every second.

5 Ways to Stop Yourself from Over-explaining

When our upbringing and various life experiences come together, the reasons behind our behaviors can be become muddied.

We need a level of self-awareness that allows us to understand the intention behind what we are communicating.

Below are five tools we can add to our mental and emotional health toolbox.

Each will provide the opportunity to improve the mindfulness of our tendencies and give us the chance to pause and breathe…before we speak.

Becoming aware that I was a people pleaser with codependent tendencies was a huge knowledge bomb.

Whenever I felt like I was being displeasing, the explanations would ramp up.

Though my people pleasing had deep roots that I had to dig up, once I removed them, I could finally live life—on my own terms.

Recognizing and embracing the fact that I couldn’t please everybody (and that I would only tear myself down by trying to do so) was one of the keys to my freedom.

A therapist once asked me when I stopped caring what people thought. There was no single moment. It took me years to learn to be comfortable in my own skin.

I had spent so much time dwelling in self-hatred that learning to appreciate myself was a task. Years of bullying and feeling different had taken a toll on me. There had been an almost complete erosion of my self-worth.

Additionally, I suffered from a social anxiety that could be incapacitating at times. Trying to build self-esteem, while fighting anxiety is no small feat.

Over time, I learned to silence the voice of my inner critic and focus on the things that were “right” about me… instead of what was wrong with me. This shift in thinking was monumental. From there, I learned to build on the “right” things.

I stopped needing to be valued by other people just to be able to value myself.

Because I had made so many poor choices in the past and failed myself so many times, I found it very difficult to trust in my own decision-making process.

Whenever I needed help, I had always gone to other people. Self-trust was about proving to myself that I was willing to look out for my best interest.

It required me to establish and uphold boundaries, which showed my inner being that I was finally able to be a responsible party in my own life.

Hand in hand with developing self-esteem was learning how to validate myself.

I had come to rely on people telling me good things about myself. Unfortunately, when they didn’t, I wasn’t able to feel it on my own.

Slowly, I learned to recognize what made me feel special about me. I focused on things that I didn’t have to be told—and continued to branch out.

When we learn to truly appreciate ourselves, we don’t have to rely on the opinions of others to validate our worth.

Earning my own self-respect was hard.

My people pleasing tendencies had taken a serious toll on the respect I had for myself. It took a while for me to build it back up.

I had to learn to recognize and use my voice, and develop a new love for myself that refused to be subdued just to satisfy someone else.

You Can Do It

As you can see from the list, there is quite a bit of inner work to be done. But, once I understood those aspects, it gave me the opportunity to work on (and improve) them individually.

Note: There will be times when a legitimate explanation is necessary. In those circumstances, it is up to each one of us to decide what to say, how to say it, and how to deliver our message in the best way possible.

Although we cannot affect someone’s interpretation of what we’re saying, when we approach the conversation using the five tools above, we can ensure that we’re doing our part—to the best of our abilities.

A love for Christ, sharing the Gospel, and experience from my personal struggles fuel my writing.

Additionally, I am the author of Life’s a Trip, a lifestyle workbook that takes an inside out approach to inner and outer weight loss.

For additional insight and self-awareness, let my workbook, Life’s a Trip, become a part of your roadmap to health…from the inside out.